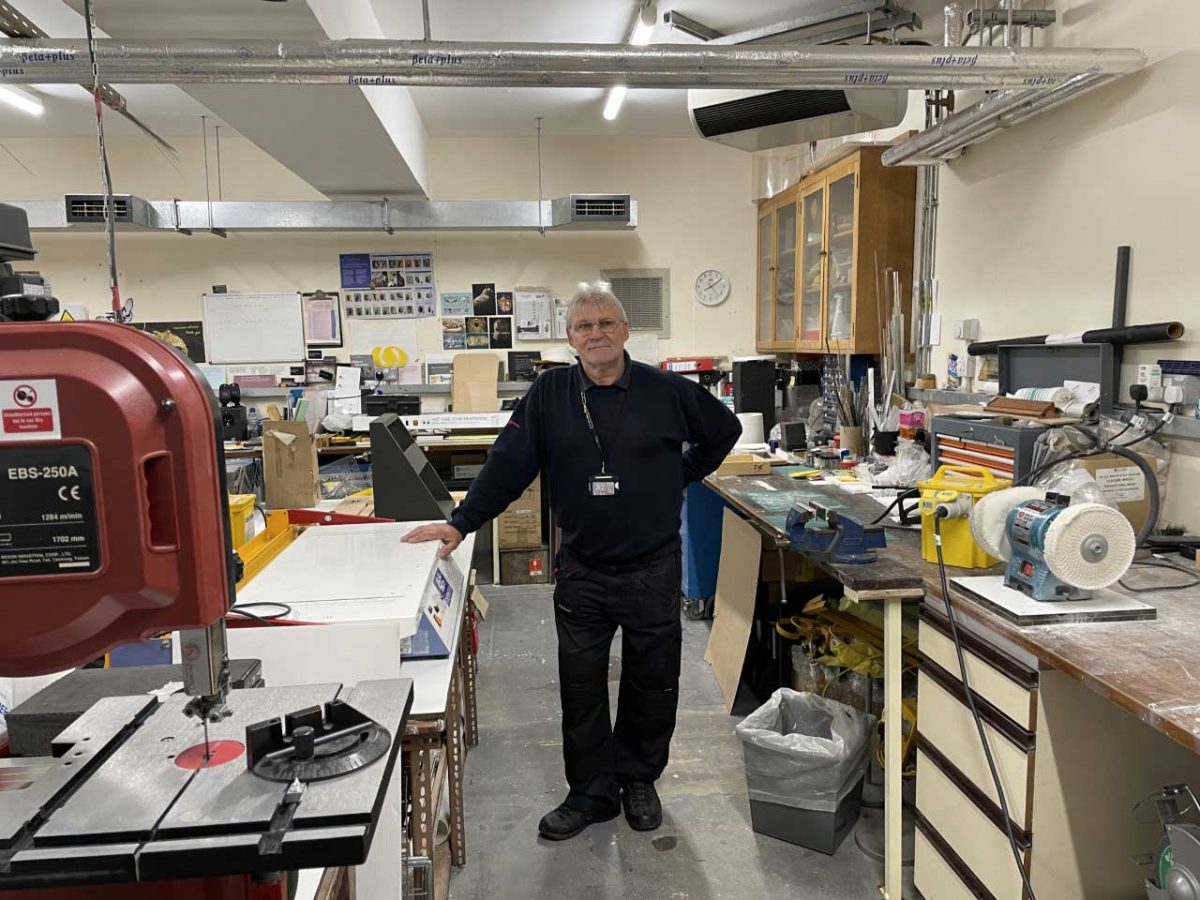 Museums are increasingly aware of the role they have to play in tackling the climate emergency, but the sector has a large carbon footprint with museums accounting for almost a quarter of the CO2 emissions of all Arts Council England NPOs. Temporary exhibitions and new displays create a lot of waste, with bespoke display units, paint and timber often thrown away.

So what can museums do in practice to become more sustainable, while ever-changing exhibitions are still needed to keep visitors interested?

At Manchester Museum, John Miller, Senior Museum Technician, and Robert O’Conner, Senior Exhibition Technician, have developed their own approach to working sustainably, creating what John calls ‘a never-ending circle’ from exhibition, to exhibition changeover, and back to the museum workshop, reusing and repurposing materials in any way they can.

They have provided some top tips and examples to inspire other museums.

Reusing what you’ve got

Changing exhibitions and displays mean that museums are often left with structures that won’t be used again, so how can you ensure these don’t remain single use?

At the end of an exhibition, John and Bob carefully strip down and cut all timber into workable units, ready to be reused wherever needed. When Pinc College, a specialist Arts College based at Manchester Museum, needed new storage for their classroom the workshop team were able to use entirely recycled materials to build them.

Recycled timber can pop up in unexpected places, for example, fire-retardant boards from an old T.rex display have been used to box in heating units, and you’d never know unless you lift up the lid and read the original text on the underside.

While it’s easy to think of new as being better, reusing materials doesn’t mean you can’t create beautiful displays. Last year, the museum installed Illuminating Nature, a stunning window display demonstrating the fluorescence of shells under UV light. From the mounts and pins to the timber, almost everything was reused, some materials for the third time. The only thing that needed to be purchased were the UV lights, proving you don’t need to spend much to create something impactful.

By breaking everything down and approaching what’s left in a different way, you can find a multitude of uses for materials

Unlike tins of paint and flat timber boards, larger items like display cases can be tricky to store while waiting to be used again. Forward planning is key in these situations, as shown by John and Bob. Despite having limited, narrow, storage space they have created made to measure pallets that fit through the museum’s narrow corridors, allowing them to store and move them around easily. All this effort has created a first port of call for anyone planning an exhibition, unused cases are considered first, saving considerably on the cost of new materials and the energy used to transport them. By considering these initially small details at first you can forge off any later problems for yourself, making it as easy as possible to keep and reuse large units instead of having to throw them away.

If you can’t use it, can somebody else? No matter how much you try to reuse materials there’ll always be something left over, why not keep an eye out for charities or local groups who would appreciate a donation?

As with many museums, paint is often bought in specifically for an exhibition and, inevitably, there will be a few extra cans left over. The museum workshop team don’t always have a use for it, so they take it to Betel UK, a charity that supports people experiencing homelessness, drug and alcohol abuse, and long-term unemployment. The paint is used by Betel in their workshops for residents, teaching carpentry skills and then restoring and refreshing furniture which is then sold in their ‘Restored’ shops.

The museum also works exclusively with suppliers whose values are aligned with theirs; for example, Little Greene, that uses sustainable ingredients in all its products, has provided the paint for the museum’s current capital development project ‘hello future’.

Timber is also often given to the Manchester School of Architecture, where it’s been used to reconstruct a damaged model of the Royal Albert Hall, recently displayed in the V&A. Cases are also shared with other departments at The University of Manchester, allowing students to showcase their work. Working with groups like this not only helps the community but reduces waste and stops more materials needing to be bought in, a win-win situation.

And Manchester Museum is part of the Museocycle scheme, a platform recently launched by Museum Development North West that allows museums to list items they no longer want for donation to other museums.

A key part of John and Bob’s success are their skills, both highly skilled carpenters who can use their craft to reduce waste. Back in 2000 they found a case that was being thrown away, as John puts it, “we always look in skips, and we saw it, and we thought, you know what that’s a decent case. So we got it out, made new legs, made a new frame, and it’s served for 10-15 years on various exhibitions and displays”.

Not everyone is a skilled carpenter, but thinking about your individual skills and how they could be put to use is a great way forward, be that upcycling unwanted materials, engaging with experts in the field, or forming a network with other organisations to share materials.

The impressive efforts of John and Bob are a shining example of a museum team that is establishing best practices and proving its commitment to building a more sustainable world. Their work inspires other teams to move away from the growth-model thinking that’s been dominant in museums for the past two decades, instead understanding their work as part of a circular economy.

Visit mmfromhome to find out about Manchester Museum’s work to support ecological thinking and action.