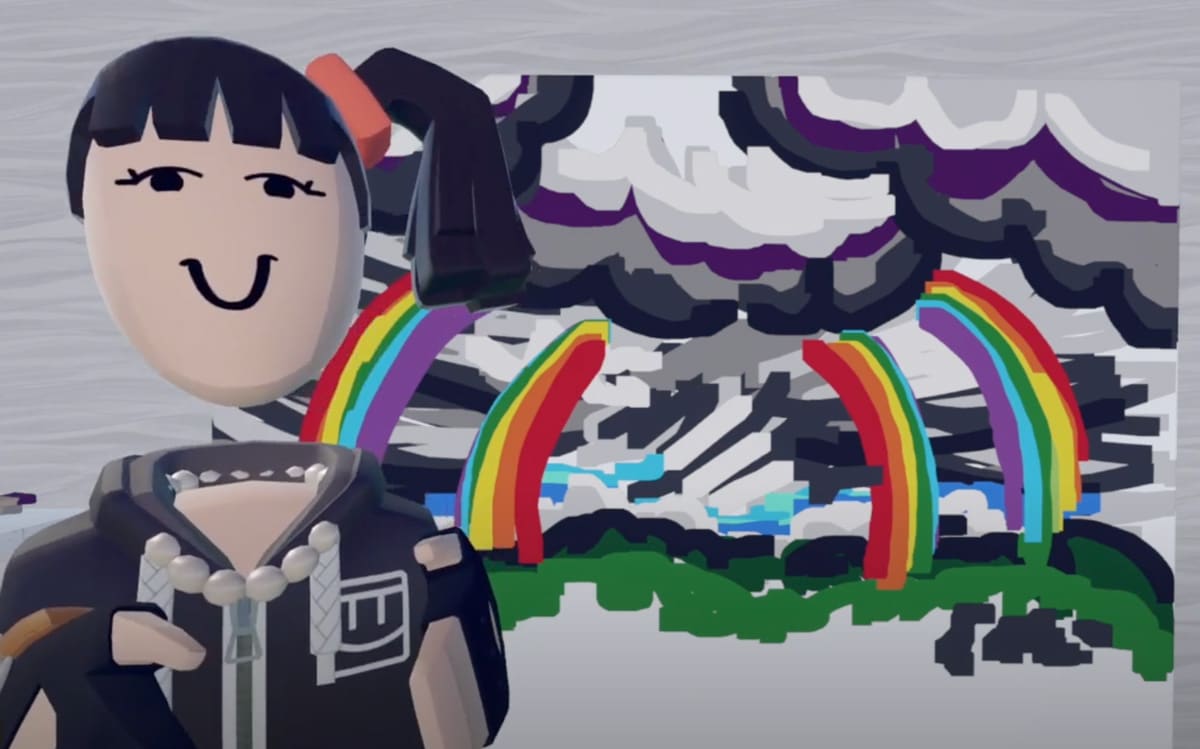 “Better World Museum and the Horizon Art Museum are proud to not be normal! Creative technology allows things that have never been done before. We hope that the resilience, community-building, equity and wellbeing we create in VR changes the world in real life.”

MuseumNext chats to museum founder, artist, VR specialist and Facebook community leader, Paige Dansinger to find out more about the role that her museums have played in people’s lives during a pandemic.

As the founding director of Better World Museum and the Horizon Art Museum, Paige Dansinger has spent much of the last decade exploring the ways in which art can be inclusive. After working for 8 years at the Minneapolis Institute of Art, Paige left in 2012 to focus her efforts on building her own museums, working on projects that are close to her heart. Her Better World Museum was later founded in 2014 where Paige used exhibits and creative technology to support people in Minneapolis to become more resilient individuals, groups and communities.

Paige says, “Situated between corporate headquarters and homeless shelters, the museum acted as a bridge to create community relationships and as a site for social justice.”

From this beautiful 8000 square foot space in downtown Minneapolis, Paige says that she was able to mentor women in creative tech and interactive art, welcoming people from all backgrounds to join her. The museum space’s standout feature was Garden One – an indoor edible garden featuring participatory mural walls, a Maker-space and a centre for Virtual Reality (VR).

“Visitors were welcomed with an opportunity to learn how to draw in VR by contributing to a participatory ‘VR Garden’. It started with a single flower drawing with a link inviting anyone on social media to re-mix the work. From there it grew and grew, creating connections and real-life relationships.”

Over time, the VR garden welcomed more than 4,000 participants, leading Paige to be recognised by the Facebook Community Leadership Program (FCLP) as a top community leader, having a meaningful impact on both the on and offline world. This accolade inspired her to move to a digital format and broaden the reach of her museum projects to communities that were not tied by location.

“With the support of the FCLP Fellowship Program I closed the museum’s flagship site to create a modular Pop-Up museum and VR Garden experience to engage people more widely. Since then, I’ve been around the world to places like Shenzhen, Beijing, San Francisco, Miami, New York, Singapore and Seattle to share Better World Museum’s activities with students, women and diverse communities.”

Asked about how this footloose and agile format has worked in the face of a global pandemic, Paige says,

“Our focus on digital accessibility and social XR across a range of platforms and operating systems has given us the agility to continue engaging with visitors throughout the periods of lockdown. In fact, we’ve experienced one of our greatest successes during this period with our Teen Leadership Program presented to the World Health Organisation (WHO + Create 2030 Covid & Arts) as a ‘Recipe for Resilience’.”

Having barely missed a beat through the pandemic, Better World Museum has given its community even more robust VR programs in 2020. She says, “In 2020, I learned that social XR (Augmented, Virtual and Open Web Realities) was the best – if not the only – tool that was needed to have a strong healthy museum community. The trust, relationships and presence are all there.”

In an industry undergoing significant hardship and changing requirements, Paige says that her own response to the Covid crisis has been to focus less on making or exhibiting art and more on providing support where it could make a real difference. From focusing on wellness and skills-building to leadership role development and amplifying voices, Paige identifies a real need to dissolve feelings of isolation and powerlessness through 2020.

A prime example of this was the +Community Voices Program, which provided funds to support diverse women and LGBTQ+ members to learn world-building skills and experiment with tech. Paige says, “Value is important to our museums and community stakeholders. It is important to make people feel valued at a time of mass layoffs when so many are suffering from anxiety, depression and other heightened mental health issues.”

Preparing for an immersive future

Paige’s work with Better World Museum led to her recruitment into the testing phase of Facebook’s newest Social VR & 3D World Building platform, Facebook Horizon in 2019. Through this experience she sees a rich and immersive future approaching fast – one that will enable digital communities and museums like her own to connect people in new and exciting ways.

In light of the pandemic and the growing enthusiasm for Facebook Horizon, Paige is already working hard to create a museum environment in this space:

“In Horizon I’ve created a new museum: an ever-expanding immersive and interactive tribute to Women Artists called Horizon Art Museum. It currently has over 20 galleries and unique worlds to visit by hopping through portal doors.

“The museum recently co-hosted a Women in VR Meetup with Facebook and it was glorious to share social presence and laughter with friends in VR this way.”

An artist herself, Paige has long experimented with future tech and embraced digital opportunities as an early adopter. Back in 2012 she collaborated on the creation of a drawing program prototype known as MuseumDraw, which could be used on mobile devices. Her early creations made on iPad drew praise from the likes of the Solomon R. Guggenheim Museum, The Met’s Digital Media Lab and ARTNews Magazine. Paige sees herself as someone who proves the value of failing forward and facing new challenges daily: “I started with zero experience in 3D world building or interactive scripting . . . but it is so exciting to script and connect everything so that it works successfully!”

Asked about how she would measure the success of the last 12 months, Paige says that the data and testimonials both evidence the growing impact of her work with both Better World Museum and Horizon Art Museum.

“Nothing is more meaningful to me than having a fifteen-year-old share that his confidence and social skills have sky-rocketed as a result of having assumed a leadership role in VR.”

Technology aside, Paige states that wellbeing is of critical importance to the work her museum is doing. And that in the current climate it has more value than ever before.  Having presented at the Facebook Global Health and Wellbeing Summit and Nobel Peace Prize Summit in her role with the museum, she says that the museum community explores different techniques to draw out trauma – be that social XR or YouTube playlists.

Asked for her overriding thoughts on what the last 12 months have taught her, Paige says: “I’ve learned that anything is possible in real life. And even more is possible in VR where there are no restrictions: no gravity, no social distancing.”

Perhaps it is that sense of freedom that will see XR technologies thrive as we head towards a post-Covid era. And as more people discover the possibilities of 3D immersive technologies, there will be people like Paige ready to show them the way. 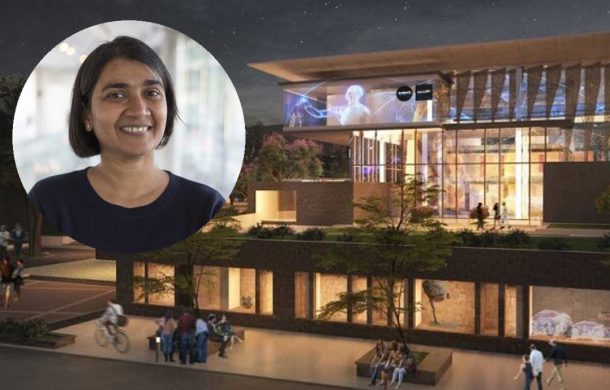 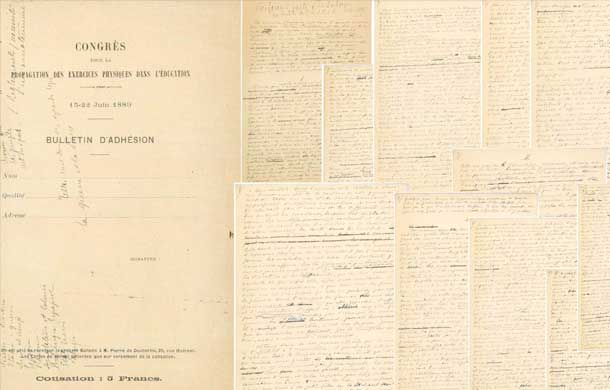 The historic manuscript laying out the original plans to revive the Olympic Games was today donated to The Olympic Museum in Lausanne, Switzerland, almost 130 years after...