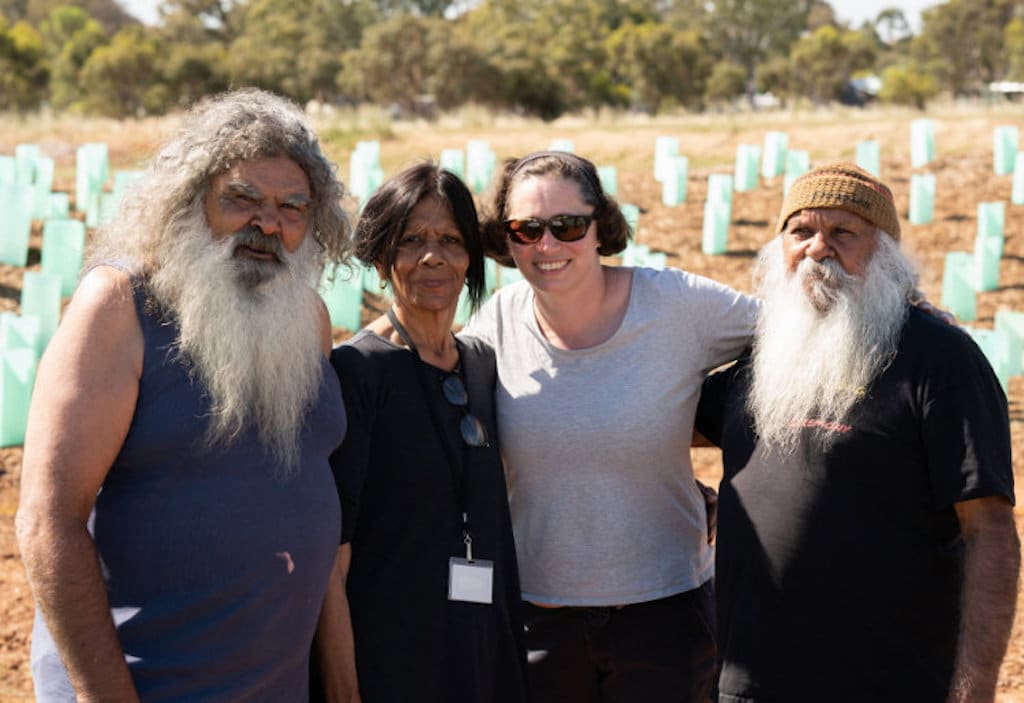 From the 1860s the bodies of First Nations People were stolen, collected and traded locally, nationally and internationally and now some of the 4,600 bodies stored in the South Australian Museum have finally been put to rest in their native land.

Our ancestors lay in a dark room, boxed, and it is only now that we begin to understand and address yesterday

For the past two-and-half years the Kaurna community has been working hard to create the Kaurna Wangayarta (wanga meaning grave and yarta meaning earth, soil or country) Smithfield Memorial, where they will rebury some of their ancestors, including those who were removed from their resting places by the development of the Greater Adelaide Area in order to build houses.

The first 100 repatriations of Kaurna ancestral remains from the museum were laid to rest yesterday in a Kaurna led reburial ceremony at the memorial park.

It is part of a pilot project in collaboration between Kaurna Yerta Aboriginal Corporation (KYAC), South Australian Museum, Adelaide Cemeteries and the Department of Premier and Cabinet Aboriginal Affairs and Reconciliation.

Jeffrey Newchurch, Chair of KYAC said: “Our ancestors lay in a dark room, boxed, and it is only now that we begin to understand and address yesterday. As Smithfield becomes a reality, we can begin to re-land and rest those of our old peoples; so, we can heal together.”

In a Guardian report published in the summer of 2020 it said that from the 1860s and well into the 20th century, Adelaide’s government, medical, bureaucratic, academic and museological elite customarily stole and swapped the remains of thousands of mostly Indigenous individuals.

“Through a range of personal relationships between establishment individuals connected to the University of Adelaide medical school, the South Australian Museum, the morgue, the asylum, the Aborigines Protection Board and Adelaide Hospital, thousands of bodies were stolen, collected and traded locally, nationally and internationally,” the report said.

In 2019 11 Kauna people, some of which were stored at the Natural History Museum, were returned to country and reburied in Adelaide’s south.

Head of Humanities at the South Australian Museum, John Carty told ABC News yesterday that the Kaurna ancestors were not treated as humans, but as specimens and apologised on behalf of the museum.

Funded by the State Government, the initial amount of AUS$300,000 has funded the co-design process with the Kaurna community, community consultation and the bulk of the construction works.

Support for Kaurna led archival research was provided by the University of Adelaide and the Commonwealth Department of Infrastructure, Trade, Regional Development and Communications.

The Kaurna pilot project the museum says is an exemplar of what could be achieved with other Aboriginal communities in the future.

“Wangayarta memorialises the challenge, fortitude, and generosity of Kaurna People in sharing this repatriation with everyone, so that together we learn our history and share the truth,” a statement from the museum said..

“The Kaurna community will bring ancestors back to a very special place on Country where they will be remembered and protected in perpetuity.”

Adelaide Cemeteries has dedicated two hectares of land at the Memorial Park to Kaurna reburials, funded the initial construction of earthworks and mulches and supported the ceremony.

The museum said it will continue to work with First Nation communities all over Australia to return all the old people to land in community led respectful ways.