How Museums Can Use Social Media? 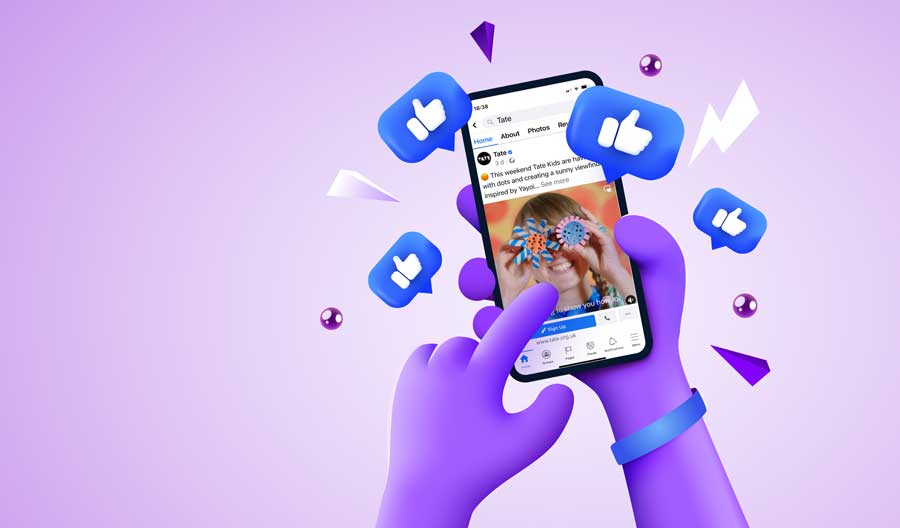 One of the biggest technological disruptions of the past decade has been the rise of social media. It’s estimated that in 2022 there are 4.62 billion people using platforms like Facebook, Twitter, Instagram and Snapchat every day. That’s roughly 42% of the world’s population.

And, this only looks set to increase.

Because young people are much more likely to use social media much than older audiences. 90.4% of millennials log into social media platforms on a regular basis compared to 48.2% of baby boomers (those born 1946 – 1964).

Museums have been keen adopters of social media platforms, with institutions like MoMA, Guggenheim and Tate attracting millions of followers.

Even smaller museums are attracting large audiences on social media. For example, the Museum of Rural Life in England shared a picture of a really big sheep with the line ‘Look at this absolute unit’, this was liked by over 112,000 people and shared by over 25,000. 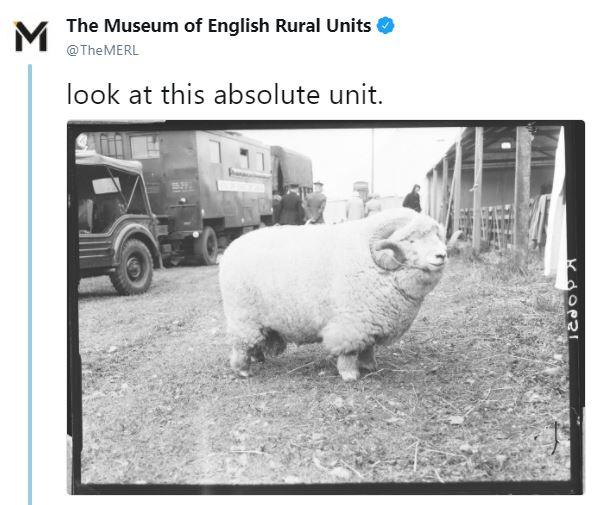 This also translated into growth in real world visitors to the Museum of Rural Life with a 47% increase.

While most museums are now on these social networks, not many have the success of the Museum of Rural Life, with many seeing it as little more than a channel through which to post promotions, and in doing so missing the ‘social’ in social media.

How should museums approach social media?

Social media should be to see it as another tool with which to accomplish your museums mission.

For many this means sharing a passion for art, history or science. Social media is the perfect platform to communicate this passion and to tell stories in a way that will resonate with your audiences.

Take the Tate galleries in the England as an example.

Their mission is to promote public understanding and enjoyment of British, modern and contemporary art. 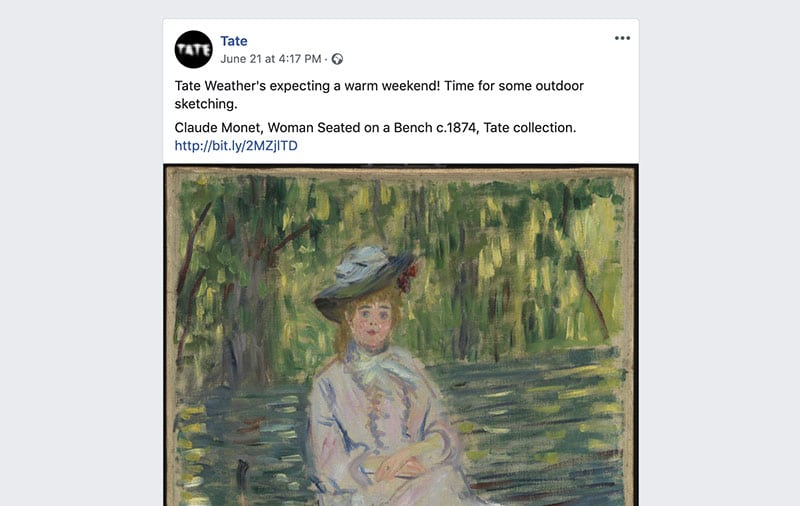 Tate use their collection to great effect across social media channels to introduce art into the social media feed of those following them in a light hearted way that doesn’t feel obtrusive.

Through social media Tate fulfils its mission. Providing both informative and entertaining content around their collection of British, modern and contemporary art. 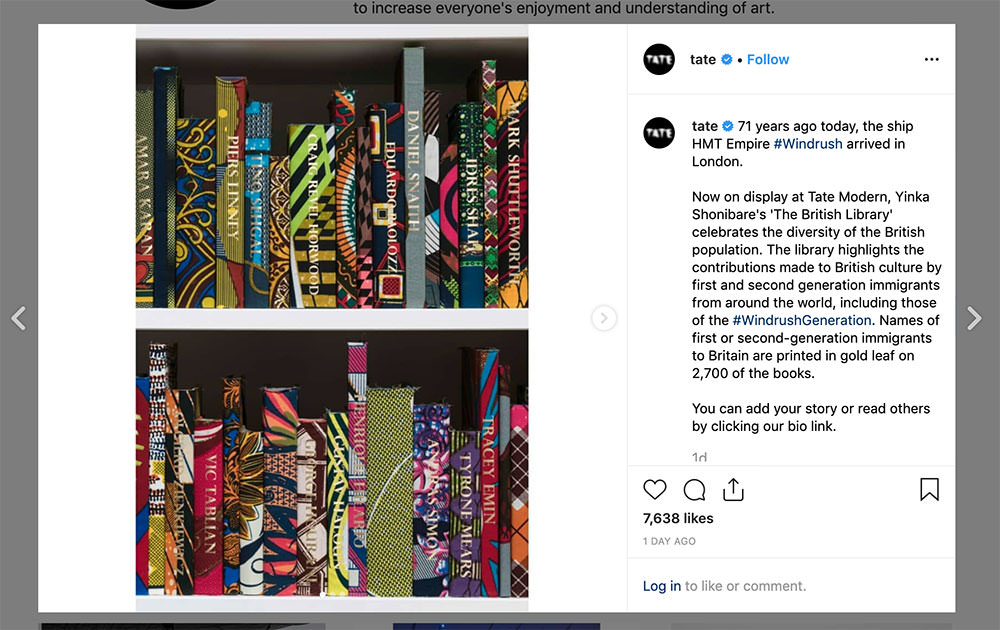 In a similar vain, the American Museum of Natural History has a mission to discover, interpret, and disseminate—through scientific research and education—knowledge about human cultures, the natural world, and the universe.

Browsing through tweets from the American Museum of Natural History you can see this mission brought to life. The museum consistently posts informative but entertaining content around their collection in a way that both achieves their mission and makes them seem relevant to a wide audience. 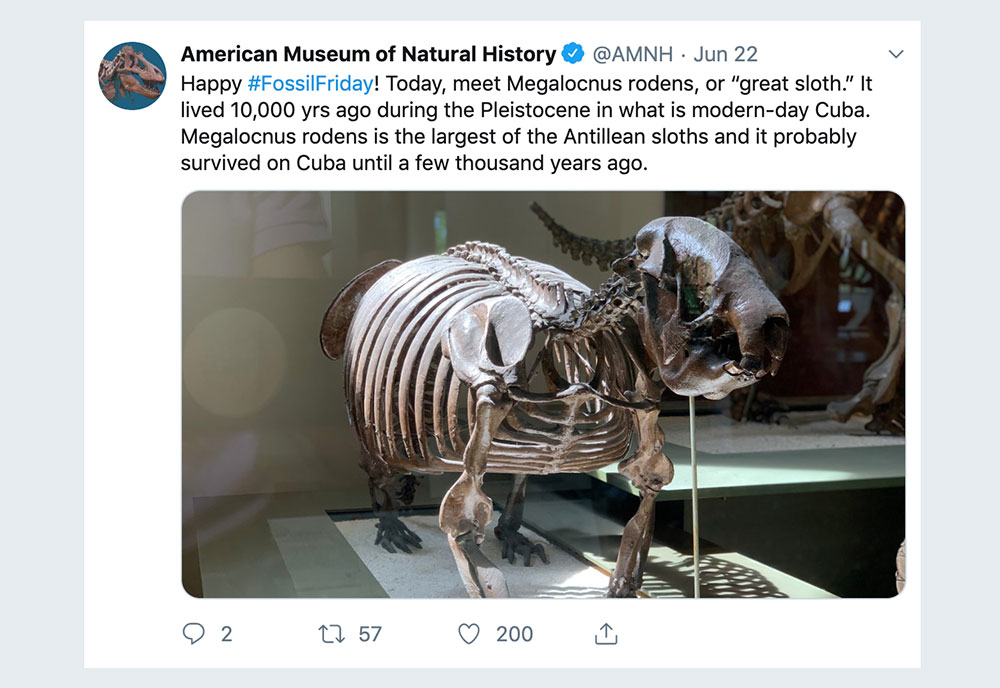 Neither Tate or the American Museum of Natural History share a lot of social media post that look like adverts designed to sell tickets to exhibitions or events.

However some in your organisation might encourage you to use social media for this.

One analogy to use to push back against this would be to compare social media to a cocktail party. Nobody would walk up to a stranger at a cocktail party and say, ‘Hey, I’m Dave. Buy my stuff.’

Like a cocktail party, social media platforms are a social space. Take time to build relationships, create content that brings value to those who read it and people will naturally want to spend time with you.

Finding the right tone of voice for your social media is something that most museums seem to struggle with, and it isn’t hard to see why. Museums are often long establish, respected and authoritative institutions and the way in which they approach most communications from wall labels through to advertising reflects this.

But this tone isn’t right for social media. So what should museums be doing? My approach is to think of voice and tone differently.

Voice: This reflects your museums personality. For instance your museum might be authoritative, knowledgable and open.

Tone: This is a subset of your museums voice which changes depending on audience, situation, and channel.

So while your museums voice remains consistent across everything that it does, the tone which it uses will be tailored to the situation. This is especially important on social media where a museum needs to humanise its tone of voice to suit the person to person nature of these platforms.

Philbrook Museum of Art in Tulsa is another institution which has mastered taking its collection into social media channels in a way which feels very natural. 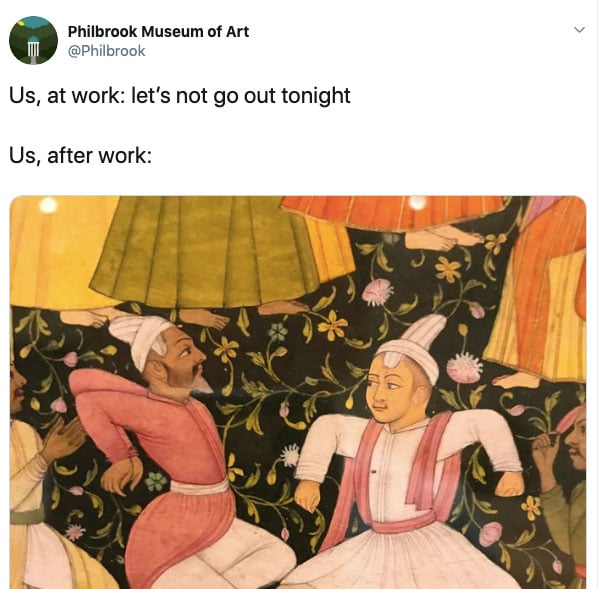 The tweet above introduces an artwork with a fun and relatable line which suits the person to person discourse of Twitter.

This is quickly followed by two tweets which add context to the first image, explaining more about the artwork and mentioning that this piece is on display in a current exhibition. 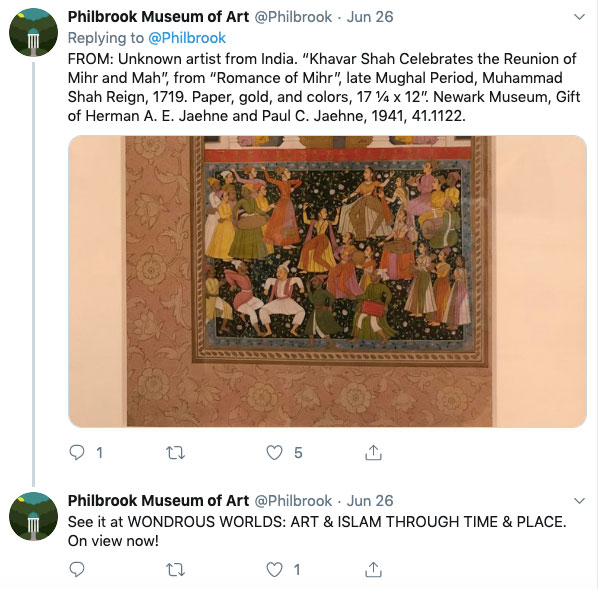 The first tweet shows that Philbrook Museum of Art understand that a different tone is needed when speaking to people on Twitter. They use humour to humanise their communication, before following on with information about both the artwork and the exhibition in which it can be seen.

Not every museum uses humour on social media, nor should they. 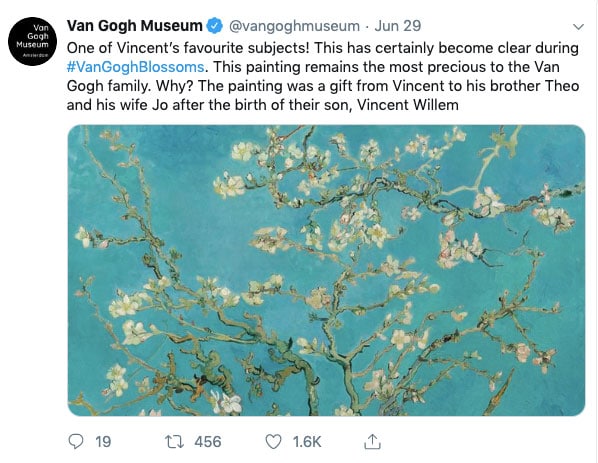 The Van Gogh Museum in the Netherlands is known not only for its world class collection, but also for its scholarly research into the artist and his work.

They don’t tend to use humour on social media, but they do tailor the written style to make it feel more appropriate for a social network. For example the line ‘One of Vincent’s favourite subjects!’ certainly wouldn’t be how they’d describe this artwork on a wall label, but humanises this tweet in a way which fits with the person to person style of social media.

Exercise: Look through your museums social media posts. Does the tone represent the personality of your organisation, but have a human tone appropriate for social media? Try re-writing recent posts using a personable, friendly, and humorous tone and see what works.

Social Media is a conversation not a broadcast

While composing interesting, informative and entertaining social media posts is essential, it’s important to recognise that these platforms offer the opportunity to speak with your audiences not just at them.

Schedule time to answer questions and participate in conversations across your networks. 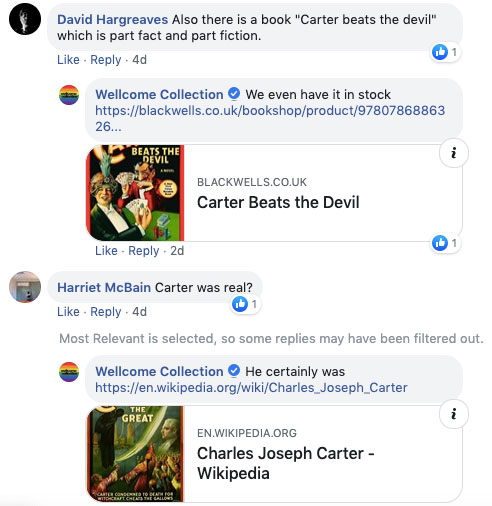 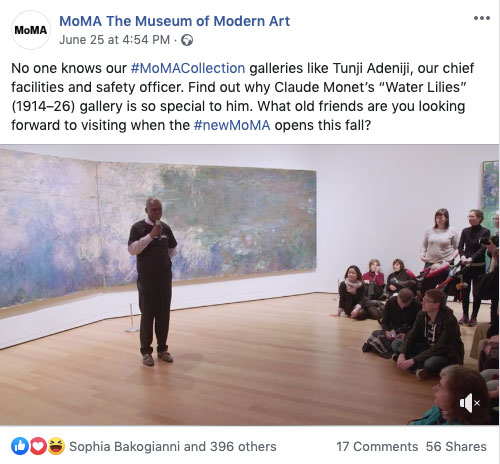 Many museums schedule regular features like Ask a Curator to give members of the public direct access the knowledgable experts working in museums, this is a fantastic way to use social media to benefit your audiences.

Depending on the size of your organisation and your budget for software subscriptions you might want to invest in a service that brings all your social media feeds into one dashboard to make it easier to keep up with questions.

Some influencers have a reach comparable to that of traditional media, and influencer outreach is now common place in museums. 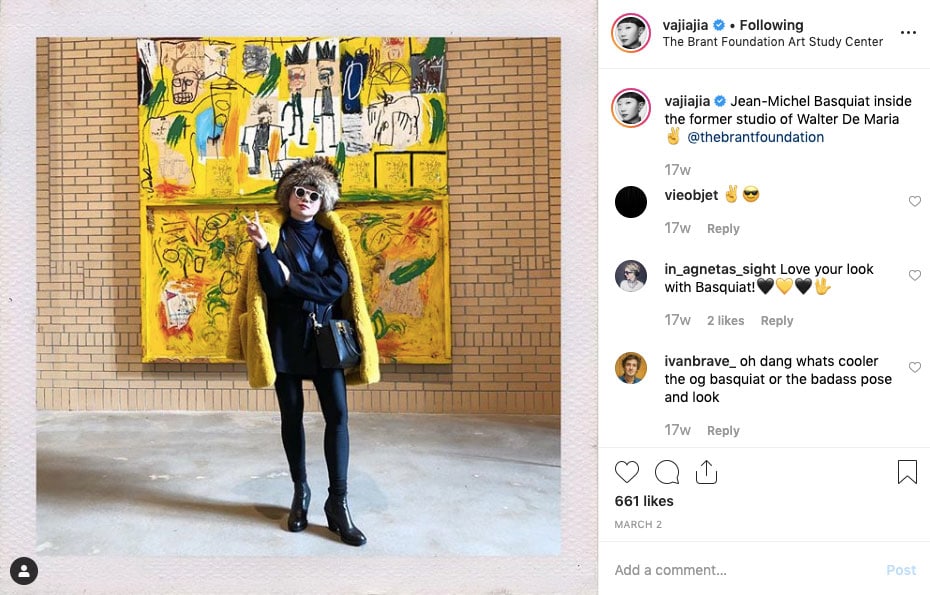 It takes a little research to build a ‘press list’ of influencers who matter, either in your geographic area or in your field, but the results can be impressive.

For an exhibition which I developed a few years ago, I made friends with four or five relevant influencers. Collectively they had over 100,000 readers in a niche relating to my exhibition each day.

Once you have a list of influencers who can be useful to your organisation, invite them to press previews and encourage them to post about your exhibitions, events or performances.

Another way to boost your social media reach is to join post on popular hashtags.

The museum community also have their own social media events.

#AskaCurator is one popular hashtag within the sector. Ask a Curator Day takes place every September and brings together hundreds of museums around the world who answer questions on the hashtag #askacurator on Twitter, but also on other social media platforms.

Whether it’s #AskaCurator or #NationalCandyDay hashtags offer museums a way to extend their reach and show relevance to existing and new audiences.

It’s important not to compare your museums social media success with big institutions like The Met, MoMA or Tate. Instead think about what success might look like for your institution, with an emphasis on engagement.

Having one million followers on Twitter or Facebook doesn’t really matter I they don’t interact with your social media output, you want to create content that gets a response.

Record what kinds of posts get people talking and learn and adapt as you gain more experience on different social media channels.

Social media isn’t rocket science, but it can take time to find the right voice for your museum.

Just remember to have fun. 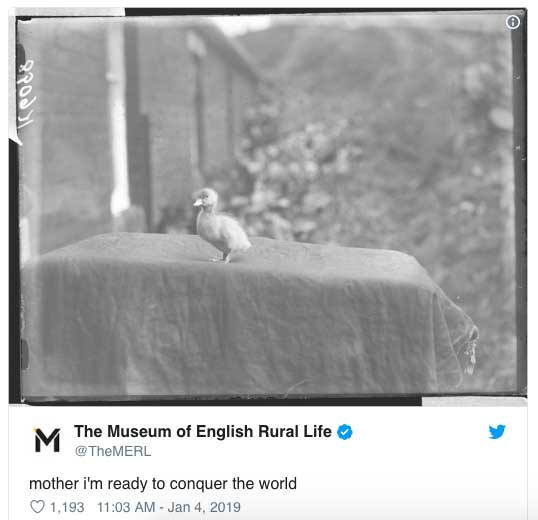 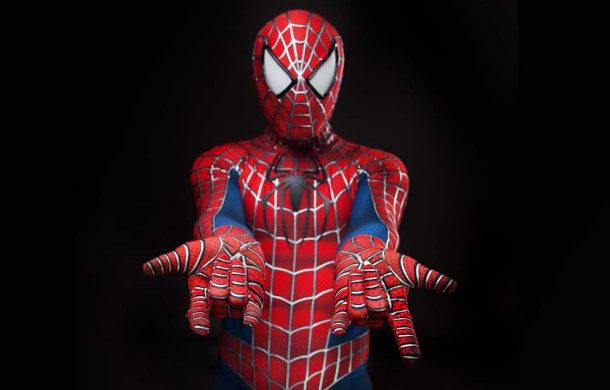 Marvel and museums? You may think that we’re writing about a comic book museum. However, if you look closely at Marvel Studio’s incredible marketing strategy,...