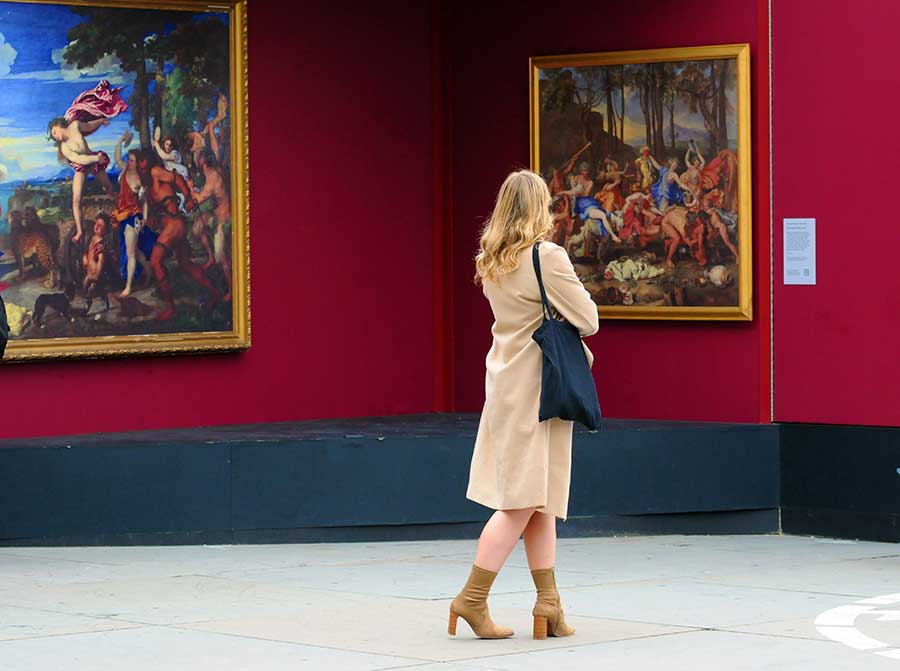 A new display open to the elements recently appeared in Trafalgar Square in the heart of London organised by the National Gallery. The pop up display contains more than 20 different reproductions of major works by some globally renowned artists such as Vincent van Gogh, Holbein and Titian, to name but three. Featuring perfectly sized versions of the original works of art, the idea is to boost interest in the impressive array of art that the gallery possesses.

Having been open to the public since 1824, the London gallery contains one of the best collections of historical art in the UK. In fact, the National Gallery is home to several thousand paintings that span the late mediaeval period right through to the 20th century. Among the most notable parts of the gallery’s collection are some of the most impressive paintings of the Italian Renaissance that are outside of their home country today. Images created by masters such as Leonardo da Vinci, Raphael and Titian are part of its permanent collection as are those from the Dutch school with painters like Vermeer represented among its images. In addition, the National Gallery has some of the best known British art in its collection, with painters like Turner and Constable featuring heavily.

Urban Art For All

To highlight some of the works in the gallery’s collection, the management team at the art museum decided to place a large-scale installation in the middle of Trafalgar Square, one of the UK capital’s most visited urban spaces. From August 10th, anyone wandering through the square to visit Nelson’s column or make their way to St James Park along the Mall will be confronted by some impressive reproductions of well-known art without having to enter the gallery itself. Thanks to the pop up installation, visitors can now view the replica artworks up close. Images such as Venus and Mars by Sandro Botticelli and Sunflowers by Vincent Van Gogh feature on the display alongside one of the most famous paintings by a British artist, The Fighting Temeraire which was painted by Joseph Turner in 1838. 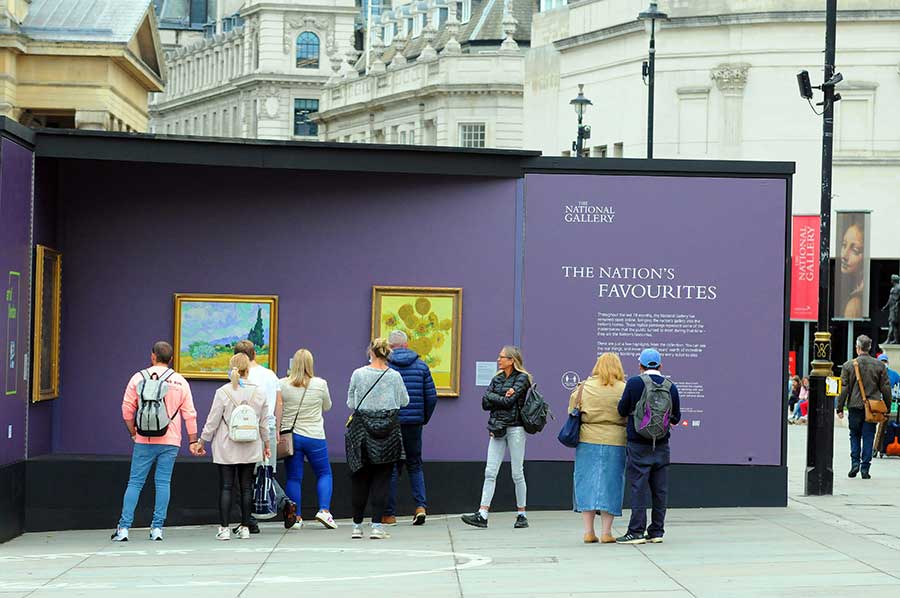 By offering members of the public an open-air pop up exhibition that features some of the most recognisable art in the gallery’s collection, it is hoped that interest in the rest of the museum’s paintings will be augmented. In addition, the gallery – like so many other museums in London – has only recently reopened following the restrictions the UK government put in place to deal with the public health emergency. By allowing passers-by to enjoy art outside, it means that some people who would never think about entering the gallery will be able to experience what it has to offer.

A Response to Closure

Christine Riding, Curator of British Paintings at the gallery and an acknowledged expert on Turner, said that the idea for the pop up experience came during the Covid-19 period when the pandemic led to so much confinement for so many. According to Riding, the need to exhibit collections outdoors was something that the gallery felt it had to accommodate. Gabriele Finaldi, the gallery’s director, echoed Riding’s sentiments. He said that by exhibiting a series of life-size reproductions on the North Terrace of the square, just outside of the museum’s facade, anyone in the vicinity would be able to enjoy a taste of what he called the treasures of the National Gallery. “For curious minds wanting to know more,” Finaldi said, “these works of art can be scanned which means that an entirely new world of art discovery can be delivered directly to their smartphone.”

The temporary installation was also conceived to be a part of the Westminster Council’s Inside Out festival. Westminster Council runs this part of London and its festival is supposed to offer a chance to showcase new outdoor art as well as entertainment and other events of cultural significance. In the case of the National Gallery’s contribution to the festival, anyone viewing the replica pieces will be able to use a free app, known as Smartify, to scan QR codes placed at the side of each image. This will allow them to learn more about the particular paintings on display and the life of the artists who painted them.

The replicas on the display range in size greatly. The largest, Bacchus and Ariadne which Titian painted in the early 1520s, is almost two metres across meaning that it can be seen from the south side of the square quite easily. The smallest image chosen for the display is about half that size but each was selected for its eye-catching qualities as much as for its fame and painterly excellence.

Other paintings that have been reproduced for the pop up exhibition include Jan van Eyck’s Arnolfini Portrait which dates back to 1434 and the Portrait of Christina of Denmark, of 1538, which was painted by Hans Holbein the Younger. In addition, the temporary show depicts John Constable’s Hay Wain, a pastoral scene of 1821 which is often described in the UK as the nation’s favourite painting, The, there is a version of van Gogh’s ever-popular Sunflowers that features, too. This replica is drawn from a series of images the artists created in 1888 and 1889 in Arles. The display and all of the chosen pieces for it will remain in situ at the site in central London until September 2nd.

London’s National Gallery has revealed that its recently acquired self portrait by Artemisia Gentileschi went on display at HMP Prison Send, a female prison in...