A major retrospective show at Beijing’s Forbidden City opened in December as a part of the complex’s 600th-anniversary commemorations. The exhibition, which is known as Odyssey and Homecoming, is set to run until 5th February and contains many paintings, videos and other documents. However, the signature piece for the show is a virtual reality installation that allows visitors to enjoy a spectacular firework show over the Forbidden City itself. The use of real fireworks over such an ancient wooden structure would be inadvisable, but the 63-year old Chinese artist, Cai Guo-Qiang, has come up with a way to do so that means no sparks will ever fall onto the palace. 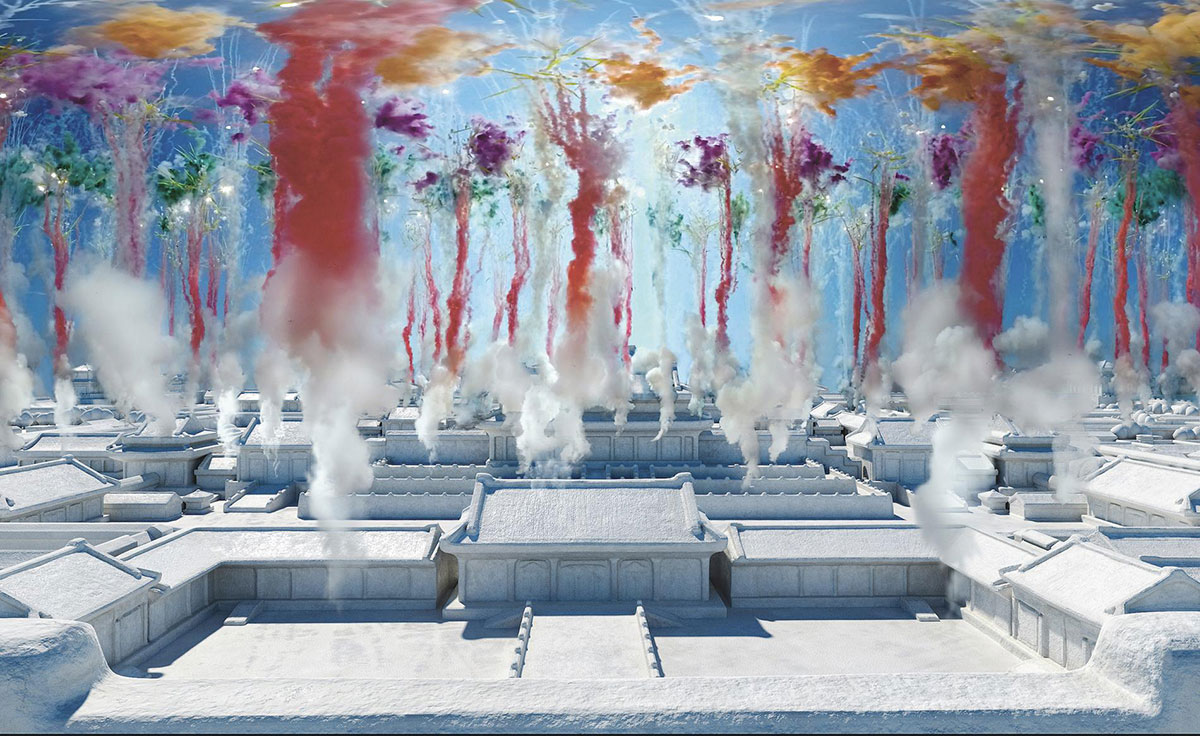 The exhibition has been put together remotely by the British historian Simon Schama in conjunction with the Palace Museum and the committee that has been organising the 2022 Beijing Winter Olympics. The idea for a Virtual Reality firework display, however, is entirely down to Cai Guo-Qiang who has made his vision come to life thanks to a technical collaboration with HTC Vive Arts, based in Taiwan. Sleepwalking in the Forbidden City uses real footage of Cai Guo-Qiang’s signature fireworks and places them into four Vive headsets which visitors to the show wear for a five-minute show. Viewing an alabaster model of the Forbidden City’s complex of buildings, the headsets play video footage of the fireworks such that the two elements combine for a truly immersive experience.

According to the artist, VR art installation was inspired by a dream he had that featured one of the Palace Museum’s most famous long-terms residents, a cat. In the video, viewers are treated to footage that sees the fireworks going off above the complex from the point of view of the creature. However, the action also shifts to offer a panoramic view of the entire Forbidden City as various pastel-coloured fireworks explode beneath. The VR experience also makes use of technology to present the palace and its surroundings in a historical context without the modern-day buildings of Beijing anywhere to be seen. 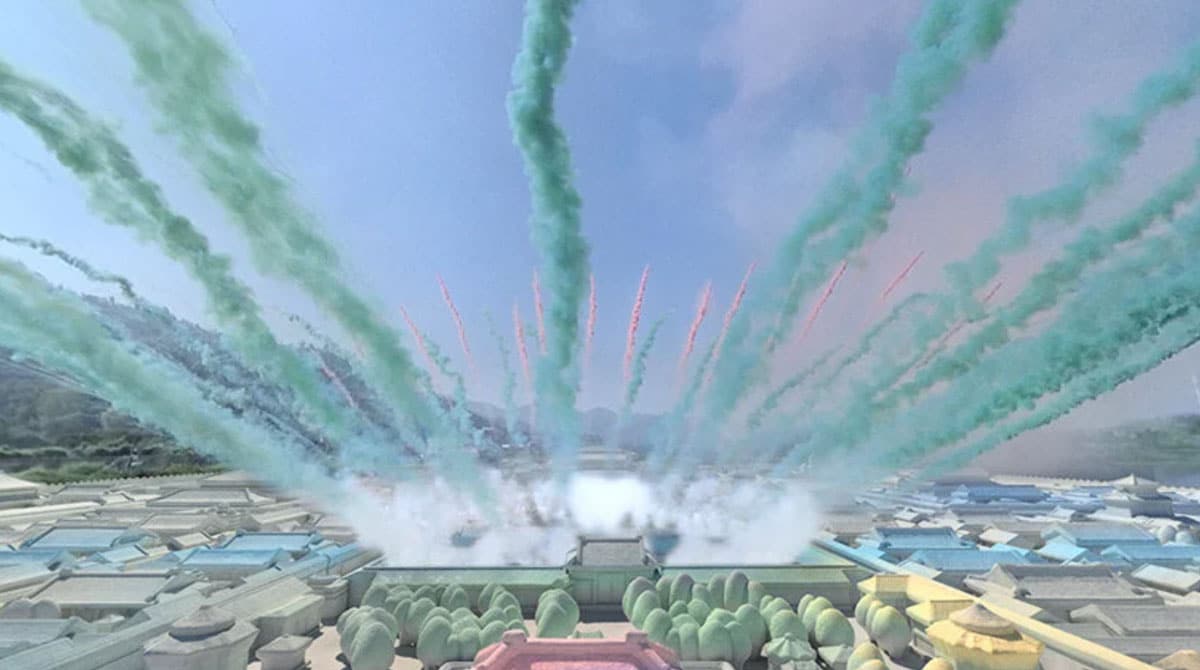 “From the beginning,” Victoria Chang, a director at HTC Vive Arts, said, “Cai wanted to use the ancient medium of gunpowder.” Chang said that the artwork would challenge VR’s precision and control because fireworks are hard to capture using such digital technology. “He also wanted to overcome the overly sleek appearance that is often found in digital works of art,” she added. According to Chang, this meant spending several months crafting the model of the Forbidden City by hand with locals rather than building a digital model instead. Only after this was built was the team from HTC Vive Arts able to scan the structure and combine it with the footage of the real fireworks which had already been captured.

Cai Guo-Qiang said that his instincts as an artist had led him to adopt VR for the exhibition because this type of technology is able to represent the surreal as well as what would otherwise be invisible. Nevertheless, the artist also insisted that the use of VR technology should only be incorporated into his work in unique ways otherwise, according to him, it would not offer its, “own distinctive artistic language.”

The use of Taiwanese technology in the Chinese capital city was no mean feat for the creative team. Indeed, making a contribution to an official Chinese exhibition is a big deal for Cai Guo-Qiang who has lived and worked in the United States for many years. As a resident of New Jersey, the artist was able to direct much of the work that was needed for the art installation from his home. However, he returned to the country of his birth to oversee the final stages of the project in late 2020.

Many Western critics have applauded the VR achievement of all the teams that were involved in bringing the creative vision to fruition. Nevertheless, the marketing of the VR show has been downbeat in Beijing. In normal times, the Palace Museum has a 30,000-strong daily capacity. That said, Odyssey and Homecoming is limited to 5,000 attendees per day, partly because of its interactive nature. Whether this reflects current public health measures in the Chinese capital or a certain wariness among the authorities in promoting a US-based Chinese artist who has worked successfully with a Taiwanese arts company is, as yet unclear. What appears to be beyond doubt, however, is that Cai Guo-Qiang has come up with something spectacular that meets the creative brief he was expected to follow. 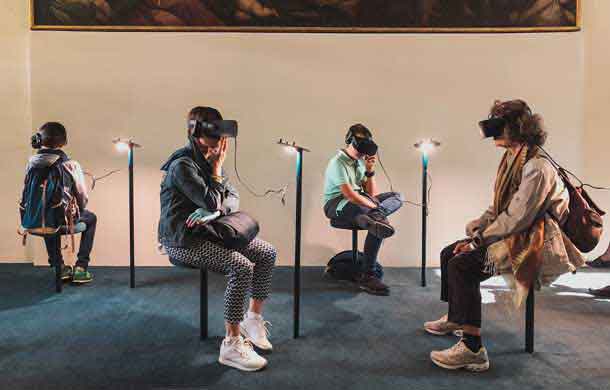 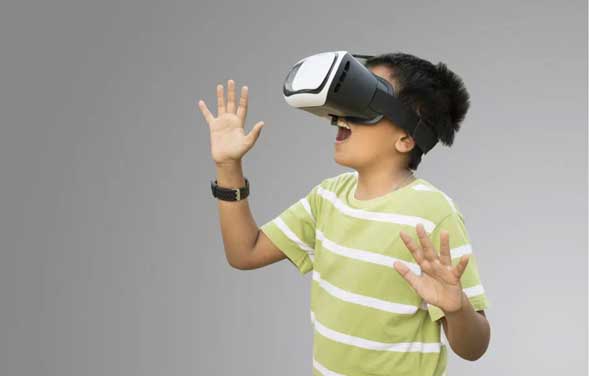