What if…? / Scotland exhibition at V&A Dundee asks how will we live together? 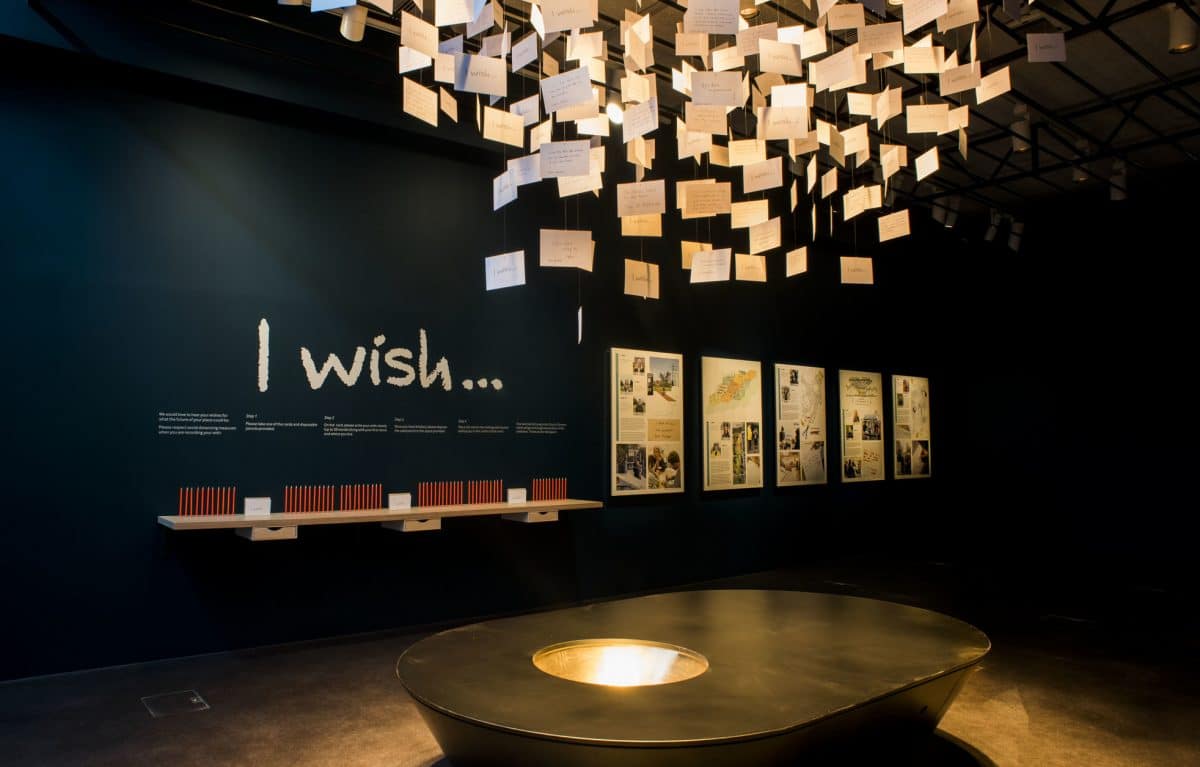 What If…?/ Scotland at the V&A Dundee explores the hopes, dreams and wishes of people across the country

An exhibition at V&A Dundee, which was set to be staged on a boat in Venice at this year’s 17th International Architecture Exhibition – La Biennale di Venezia, has brought together a snapshot of the hopes and dreams of a nation.

What if…? / Scotland responds to the Biennale’s theme How will we live together? And has expanded the museum’s outreach programme in new ways by connecting citizens with designers, architects and artists.

At the beginning of 2020 and prior to the UK’s first nationwide lockdown, 7N architects paired 25 people from five locations in Scotland: Wester Hailes in Edinburgh, Paisley in Renfrewshire, Annan in Dumfries and Galloway, Elgin in Morayshire, and Lerwick in Shetland – with 25 designers, architects, and artists – to share their hopes, dreams or wishes for the future of the place where they live. 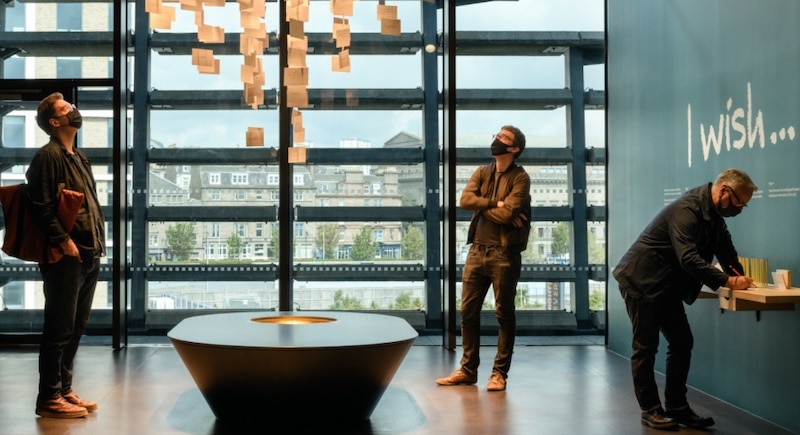 The results have since been on show at the museum over the summer (running until 21 November – aligned with the Biennale) with an additional spin-off exhibition What If…?/ Dundee, exploring the hopes, dreams and wishes of local people in Dundee for the future of their city.

The project was commissioned by the Scotland + Venice Partnership – an international project designed to promote the best of contemporary art and architecture from Scotland on the world stage – and has been produced by award-winning Edinburgh based architecture and design practice 7N Architects, in partnership with Architecture & Design Scotland, the Scottish Government, Creative Scotland, British Council Scotland and National Galleries of Scotland.

Re-engage the civic role of design

What if…? / Scotland has attempted to re-engage the civic role of design professionals by asking communities from across Scotland to share their hopes and dreams for the future of the places they call home. The architects and designers then used these wishes to begin exploring ideas in response to the community challenges being faced.

Having been through three lockdowns since march 2020 the concept of people in Scotland’s communities coming together to plan for a better future has become more significant than ever. 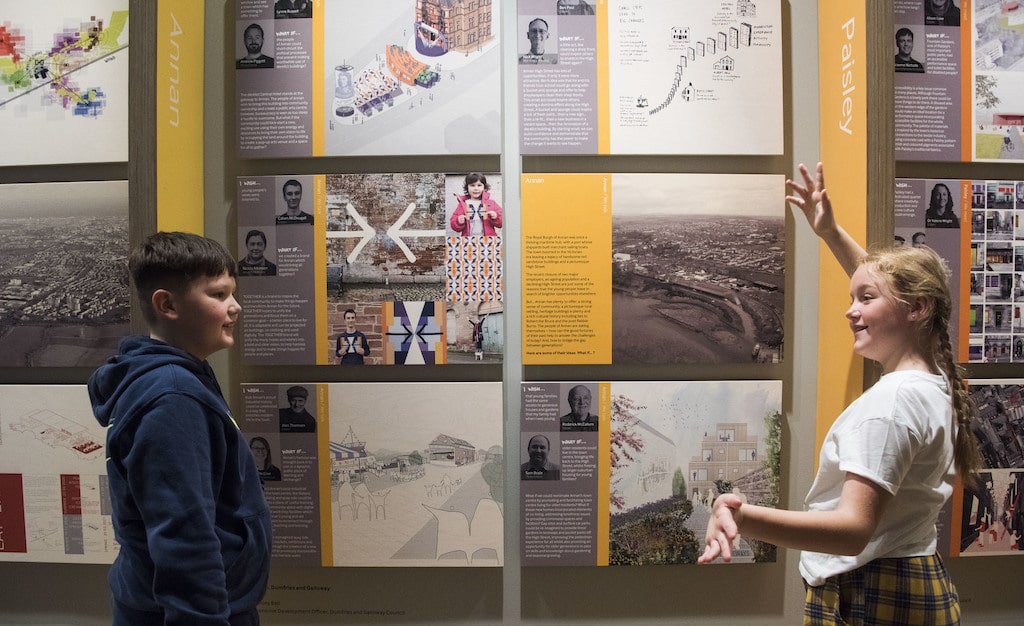 “The themes that emerged through the initial workshop showed how important the climate emergency is to people, along with their town centres, having places for young people and the need for a sense of community spirit and belonging,” says Ewan Anderson, Managing Partner at 7N and Curator of the exhibition.

“Most striking of all was the energy, enthusiasm and innovative thinking generated by the creative conversation between the architects and the citizens. As we emerge from the pandemic those stories and lessons can help us harness the creativity of our citizens and designs to tackle these urgent issues.”

The What if…? Exhibition is located in V&A Dundee’s learning centre which includes the corridor leading to the auditorium and workshop rooms. 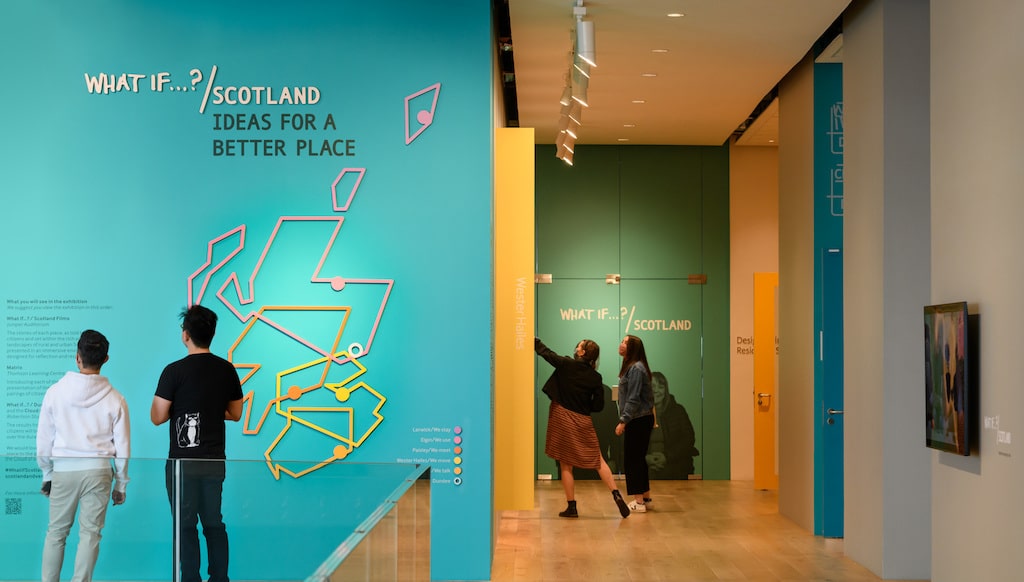 7N turned a corridor into an exhibition space – with panels printed on birch plywood, coloured vertical “fins” defining the content from the original five communities they worked with.

“As this space is not normally used as an exhibition space we used colour and strong graphics to draw visitors in from the main gallery space and make them aware that there was significant content available in this part of the museum. This, in turn, led them into the cinema space and the Cloud of Dreams room.”

The key ideas are expressed in images developed by the architects and designers that collaborated with citizens across the country. These are displayed as a wall of panels which fill the corridor space with the citizens’ wishes and the architects’ ideas. 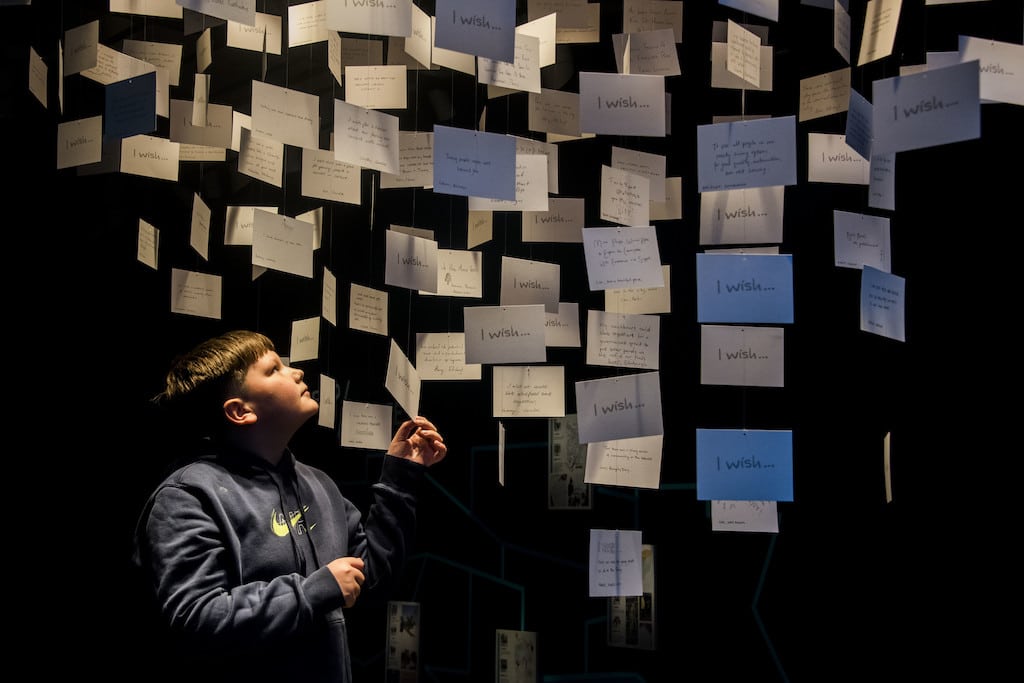 The Cloud of Dreams room forms the centrepiece of the exhibition and is inspired, says Anderson, by Scotland’s clootie wells tradition of hanging rags on trees. The wishes of all the citizens who have taken part are written on cards and suspended above the room. As well as this, visitors to the exhibition at V&A Dundee have been adding their wishes and dreams for their places to the wishing well – resulting in more than 6,000 wishes by mid-October.

A significant element of the exhibition are five immersive films from the workshops. The films created by Bash Art Creative are filmed as triptychs and projected across the entire wall of the museum’s auditorium, approximately 12m wide, which fills the field of vision of the viewer and immerses them in the landscapes of the places. 7N architects wanted this to be a moment of reflection, allowing the visitors to get a real insight into the design process, the five places and the issues faced by the five communities.

From boat on the Venice canals to museum space

“We had to transform an exhibition design originally planned for a pre-COVID-19 world in a boat shed in Venice into a Covid-19-safe experience in a space that hadn’t previously been used for exhibitions,” says Anderson.

This meant 7N had to carefully consider dwell times and visitor flow as the spaces had capacity limitations and consider how they made the interactive ‘Cloud of Dreams’ work with COVID-19 restrictions. To accomplish this as an iterative process a collaboration was developed between V&A Dundee, Eastern and the contractor BECK, together with Architecture and Design Scotland, O Street and Bash Art Creative. 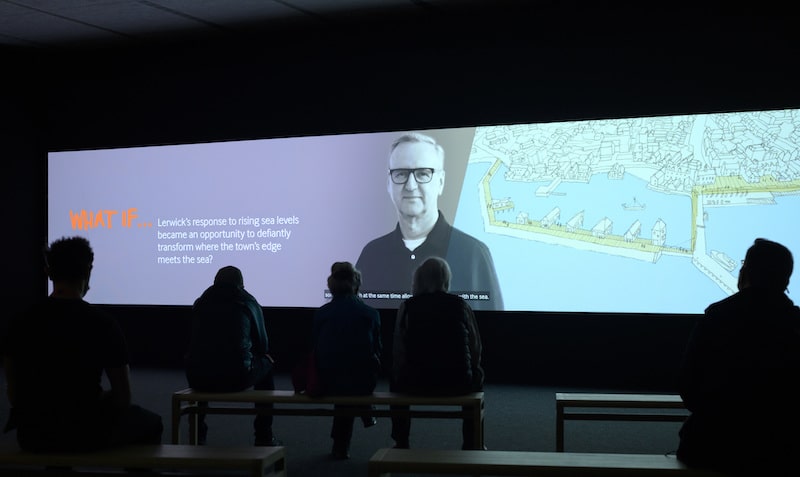 “The exhibition’s aim was to stimulate visitors to think about their own places – what is their wish, dream or hope for the future of their place? We hope that the visitors can see how architects and designers can enrich those ideas and help to realise them. In the current climate we have seen how quickly we can change and adapt when we really need to, and it is critical that we continue to do that to meet our extraordinary challenges.

“For me the project demonstrates the essence of being an architect. It is about listening to what people say about their needs and desires and coming up with creative ideas that can satisfy this and add something more. It was just us and the citizens, a sketchbook, a pencil and a series of engaging conversations about ambitious wishes and ideas for the future. Architecture unplugged, if you like.”

Anderson says the subtext of the exhibition is an advocacy case for re-discovering the civic role of architecture in society. The ideas and collaborations between the citizens and designers, he says, are at the heart of the exhibition, with the ideas panels and films demonstrating how creative process and the Cloud of Dreams allowing the visitor to directly engage in this by adding their own wish or dream. 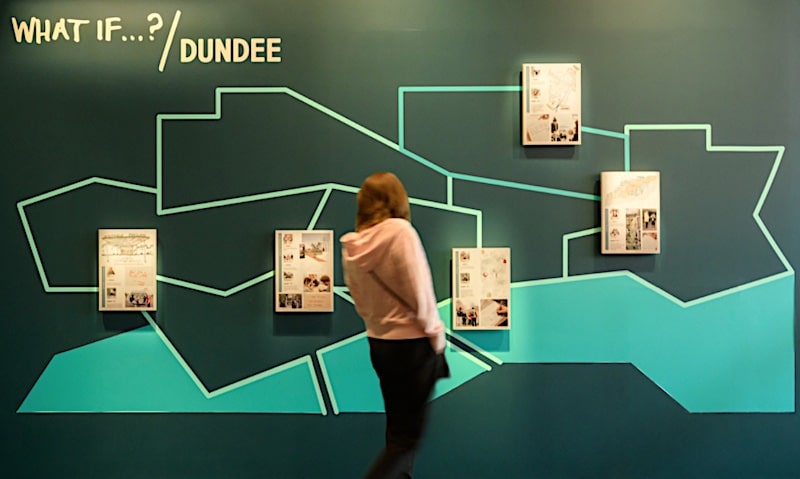 Alongside the exhibition 7N has collaborated on a series of events with the V&A Dundee, as well as a special edition of the V&A’s Work in Progress which is aimed at early career designers.

With re-designing the exhibition to show at V&A one of key changes was the addition of a What if…?/Dundee, which 7N have been able to run in collaboration with V&A Dundee and communities in Dundee. This space has evolved throughout the exhibition as collaborative workshops have taken place across Dundee.

What If…?/ Dundee held a series of five monthly workshops from May, which have just been completed, engaging with family groups, local primary schools and young people who are undertaking training or employment as well as a group of the more senior members of the communities.

This involved pairing together five designers and five Dundee citizens to explore creative ways to make Dundee a better place.

“Asking What if?… and empowering citizens to voice their opinions and let them be heard is extremely important,” says Chris Lewis, Schools Development Officer, V&A Dundee. “We all have views on where we live and how it could be improved, but by engaging in this design process, such views can be developed into ideas and wishes that can then be presented and taken forward.”

“We used the What if?… model of pairing up a citizen and designer and, taking inspiration from the Scottish Government’s 20-minute neighbourhood initiative, also had some of the groups do additional walks and speak specifically about these themes.”

For What if?… Dundee, the core engagement was on a site that will eventually become a new community campus school and facilities and allowed designers to explore how the surrounding communities could benefit from the development.

“It has really highlighted the importance of the design process in visualising people’s ideas.”

The raw data collected throughout the What if?…Dundee process has been collated and is being shared with Dundee City Council to improve current and future developments. 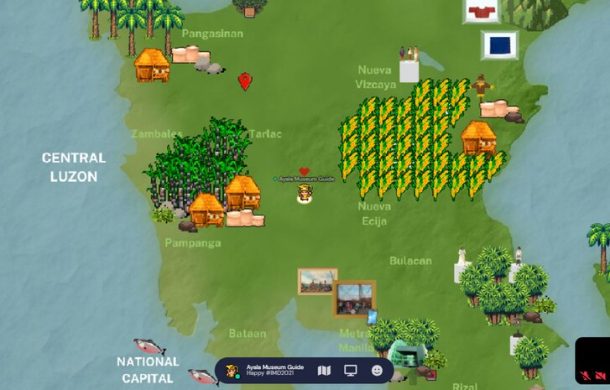 The Ayala Museum Asks “Where is the Filipino?” With an Interactive 8-Bit Tour 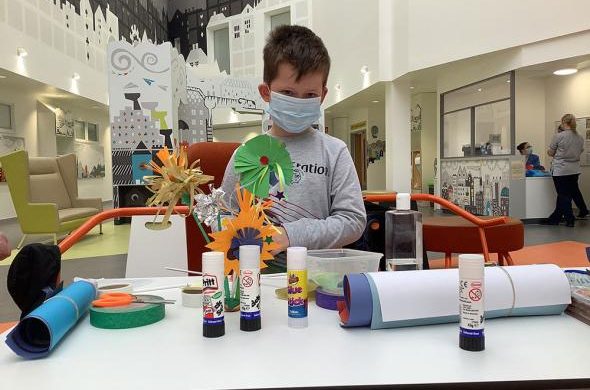 Art Helps at the National Galleries of Scotland

Engaging with art is proven to have a positive impact on our general wellbeing. Spending time in a gallery or taking part in an engagement...