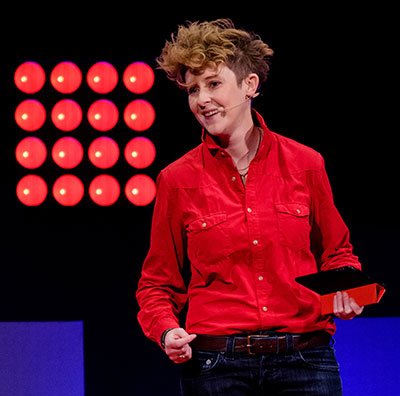 Chief Creative Officer
We The Curious

Anna Starkey is Chief Creative Officer of We The Curious – a space and an idea dedicated to nurturing a culture of curiosity.

Anna has worked across science and the arts, as a BAFTA nominated children’s animation writer, UK Particle Physics outreach officer and Director of Impossible Projects at a multidisciplinary public neuroscience lab.

She was freelance in TV for over a decade, as a script editor, voice director and writer, as well as producing the BBC Proms for TV, BBC Young Dancer, and global live cinema broadcasts from the Royal Opera House London.

Over the last 3 years she has been driving a new direction for an interactive science centre on Bristol’s harbourside – evolving to become a more open, participatory, cultural space that removes boundaries between the arts and sciences, people and ideas.

She is a TEDx speaker and Fellow of the Royal Society of Arts. Anna is also a trustee of the British Paraorchestra and Friends.