For hundreds of years, Japanese artists and storytellers have been captivated by yōkai – supernatural monsters and household objects-goblins come to life. A new exhibition at Art Gallery of New South Wales brings these supernatural spirits to life in a large-scale interactive touch wall.

Translating delicate yōkai from Hiroharu Itaya’s 19th century narrative handscroll ‘Night procession of the hundred demons (Hyakki Yagyô)’ into the digital world, the touch wall retains the rich beauty of the original work while extending its stories through interactive technology.

The interactive was developed by Australian based S1T2. There co-founder Chris Panzetta explains, the aim of the touch wall was to use technology to tell the stories of Itaya’s yōkai in a way that would resonate with and engage contemporary audiences.

“Bringing these characters to life gives audiences the opportunity to experience Itaya’s vision in a tangible, visceral way. It’s one of the many ways technology can seduce us into engaging with the heart of a story that – especially in today’s busy world – we may otherwise miss.”

Drawing inspiration from Japanese traditions of narrative handscroll and Noh theatre, the touch wall blends illustration and motion, the physical and the digital, into a contemporary expression of the supernatural. With animations that extend, rather than replace, the movement of Itaya’s yōkai, the stories and personalities of these supernatural spirits come to life before the audience’s eyes.

Brooke Carson-Ewart, Head of Digital Engagement at the Art Gallery of New South Wales, explains the Gallery’s interest in using animation to extend Itaya’s scroll into the digital realm.

“Scrolls such as Itaya’s would have originally been unscrolled as the story was told and are often considered the precursors to modern day animation and film. Animating the parade and bringing not only the characters to life but also the atmosphere of the parade seemed a natural fit.”

Shown alongside Itaya’s handscroll, the touch wall mirrors the original work’s 6m length while extending its height from 30cm to 2m, immersing visitors in a supernatural world they can not only see through projection-based animations, but also touch through six conductive ink interaction points.

The use of conductive ink – invisible under the large-scale projections – to facilitate interaction creates a feeling of magic, inviting audiences to step directly into the world of the artwork as Itaya’s yōkai animate beneath their fingertips. And, with six interaction points hiding 24 different yōkai animations, audiences find that repeated interaction is rewarded by the opportunity to engage more deeply.

“Having the results of the interaction change the more audiences interact gives the touch wall a certain kind of magic. Your interaction begins a conversation with this forgotten world – the more you engage, the more you uncover,” says Panzetta.

Over the course of the three-month Japan supernatural exhibition, the touch wall has seen over 290,000 individual interactions, with one conductive ink touch point triggered every 11 seconds. As Carson-Ewart explains, this interactivity has been crucial to bringing audiences closer to the original work.

“At the Gallery, we believe that digital interactions within exhibitions should always enhance the visitor’s experience with the original artwork, rather than being a distraction. In this exhibition, we had the challenge of introducing Australian audiences to characters that are very well known to audiences in Japan. Some may not be immediately obvious to modern audiences when looking at the original scroll, but through interacting with the touch wall visitors come to more intimately understand the personality and stories behind these characters.”

The interactive touch wall is live at the Art Gallery of New South Wales Japan supernatural exhibition until 8th March 2020. 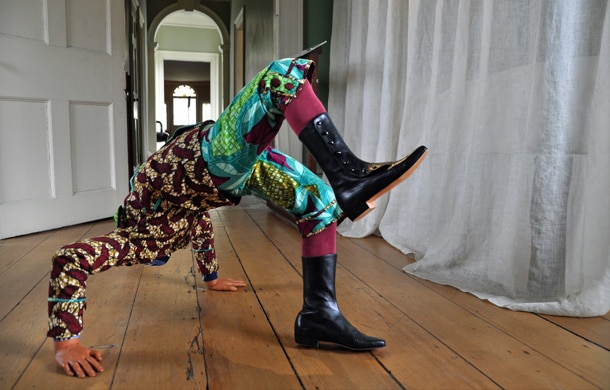 Thinking Outside the Lines: Contemporary Art in Historic Settings

The Perception of An Historic Setting Static as defined by Merriam-Webster is something, “characterized by a lack of movement, animation, or progression.” And this is...